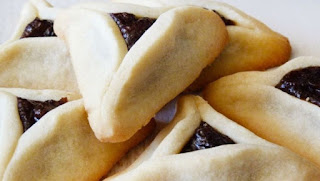 It is just a couple of days before Purim, so I thought it was time to squeeze in another blog.  I have written some blogs  in the past about celebrating Purim in Israel.  It is normally quite a raucous holiday since everyone is commanded to get drunk.  The streets are normally filled with "Adloyada" parades (adloyada translates to "until you are no longer aware...").  Normally people are wandering the streets in costumes, going to Purim parties, bringing each other gift baskets and,  in many cases, going to synagogue to hear the reading of Megillat Esther (the Book of Esther).  It is celebrated with particular abandon in Israel's high schools.  We have some of the photo evidence from past years.

This year, for the second consecutive time, Purim will be quite different.  Even though there is cause for optimism in Israel as the number of vaccinated Israelis has been increasing and the spread of the virus has been decreasing, there is still too much concern about the rampant virus to return to normalcy.  Perhaps by next Purim.

So the first question is how people can hear the Megillah.  According to Jewish law, we are supposed to hear it live, in person,  read from an actual parchment scroll rather than a book.  Many synagogues are organizing outdoor readings, throughout the evening on Thursday night and Friday morning - so that people can come in smaller groups and hear it.

Others are of the opinion that hearing the scroll read by Zoom is halachically acceptable, as long as it is read from a parchment scroll.   I normally read chapter 8 - and sometimes 8-10 - in Synagogue.  This year, I guess we are going with the more lenient approach, so I will be reading on Zoom from an actual scroll as part of our shul's reading.  If you want the link for it - please let me know and I'll be happy to send it.  I think we will start at about 6:30 p.m. Israel time (11:30 a.m. EST) on Thursday Feb 24, 2021.

My other project is to try and make hamentaschen (Haman's ears in Hebrew; Haman pockets in Yiddish) - which are triangular pastries filled with different fillings.  I would say that poppy seed, prune and  chocolate are the most common fillings, though there are many others.  I never really liked the poppy seed filling even though I love poppy seed  bagels.  I'm thinking about apricot, strawberry, dates and chocolate as four options.   Lemon is another idea since it would add some nice colour.  I guess I could add Kiwi as well and then I could have some green ones.  Sure it is easy enough just to go out and buy some - since every bakery in Israel is selling them now - but I would rather have some fun with this.  (We also prefer making our own latkes on Chanukah and our own blintzes on Shavuot).  We'll see how they come out.

We have had some very strange news stories in Israel over the past couple of weeks. 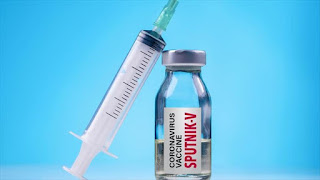 Firstly, an Israeli woman "accidentally" wandered into Syria.  Now how anyone accidentally wanders into Syria I have no idea.  There are Israeli military forces, Syrian military forces and even some UN forces throughout the area.  Much of the border is heavily guarded though I suppose there are some areas that aren't.   In any event, she was picked up by the Syrian forces and interrogated.  Israel and Syria then negotiated a deal through Putin, acting as an intermediary, whereby Israel would get her back, give up two Syrian shepherds that Israel was holding - and one additional bizarre piece.  Israel would agree to pay for $1M USD worth of Russian-made Sputnik-V Coronavirus vaccines - to be delivered to the Syrians.  Very strange deal.  Is Syria that strapped for cash that it had to get Israel to buy some Russian vaccines for it?  Or did Putin want to extract the money from Israel to exert a show of power over Netanyahu?  Or maybe he just wanted the chance to inject a bunch of Syrian leaders and military officials with Sputnik-V.  Netanyahu initially tried to keep the terms of the deal confidential but they leaked out.  So he held a press conference and talked about the deal he was able to negotiate with his friend Putin...The whole thing happened very quickly.  Curiously, this all just weeks before an Israeli election. 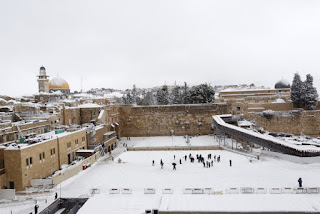 We also had some snow in Israel.  Apparently, it snows, on average, about once every five years in Jerusalem.  The snow doesn't stick around for very long but people try and come from all over the country to see it - and if they can, to throw snowballs at each other.  The traffic getting in and out of Jerusalem was reportedly atrocious (we didn't go) and it all melted by the next day.  But people referred to it as a "Snow Holiday" and revelled in the excitement.

Snow falls in Israel more regularly in the north, up in the Golan Heights, at Mount Hermon where there is even a  ski site.  Much of the snow for the site is artificial but it does tend to snow at least a  few times there most winters.

Needless to say, my North American family and friends are not nearly as excited when it snows.  For me, this may be my first winter ever of not seeing any snow.  I kind of miss it.  Winter in Israel has consisted of a handful of rainy, windy days, spread over the past few months.  The sunny days in between are wonderful and are sometimes beach-worthy, though the water is too cold for a swim.  We can use the barbecue year round. But if the rainy days were snowy days instead - I think that would be more fun. 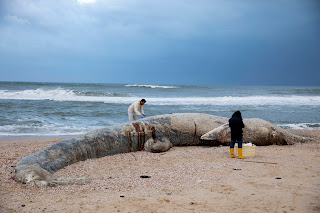 You may have also heard that we had a major ecological disaster.  There was a huge oil spill somewhere off the cost of Israel last week.  This has caused massive damage.  A dead 17-meter baby fin whale washed up on the beach a few days ago - covered in oil - and many other sea creatures have perished or struggled to deal with these adverse conditions.  Thousands of Israelis have been volunteering to go to the beaches and help clean up tar from the coast but it could take years to clean up this mess.  As of now, it is unclear what happened, though the Times of Israel is reporting that it was a Greek owned vessel, the Minerva Helen.  The investigation continues.

The Israeli government is still in a state of flux, awaiting the next elections on March 23, 2021.  The government does not know how to handle the airport.  It is trying to keep out the "mutations."  For a while, this meant ensuring that everyone had to go to a state-selected isolation hotel on arrival.  But it leaked out that people were able to pay a fine voluntarily, of about 5,000 Sheqels ($2,000 Cdn) and then they could isolate at home, even though the government was no longer enforcing the home quarantines.  So the government decided to stop flights to Israel...with, of course, some exceptions.  At  first it was 2,000 passengers a day, that could arrive pursuant to a lottery system, based in part on urgent humanitarian considerations.  Now that number is supposedly being reduced to 200 per day, at least until March 6, 2021.

Just in time for the Purim holiday, the Israeli government has reopened shopping malls, most schools and many other places that were closed up until now.  The government has also been rolling out a  "Green Passport."  People who have received both doses of the vaccine and waited a further ten days are able to get an official Green Passport through a government sponsored phone app or website.  This passport is tied to people's personal "National Identity" number so people can prove that they have been vaccinated.  The government would now like to open up restaurants, travel, gyms, pools, hotels, etc., only to those who have been vaccinated or can prove that they had Covid-19 and recovered.  (Instead of a Vaccination Certificate, you can get a Recovered Covid-19 Patient Certificate).

You probably know where this is going but some enterprising, tech-savvy Israeli entrepreneurs decided that for a mere 1,000 shq (about $400 Cdn), they could offer the public forged vaccination certificates.  News of these businesses quickly spread - to the point where a few of these enterprising criminals were on tv news this week (disguised of course) speaking about their wonderful business idea.  So the government has ramped up the penalties for those making or using fraudulent vaccination certificates and has also ramped up enforcement  efforts.  For the record, our certificates are real.  Whether or not they are actually effective, and how long they will last - well these are different questions.

Some other countries are reviewing Israel's use of these certificates.  In Canada and the U.S., as well as many other countries, there are privacy considerations, issues concerning medical disclosure, and larger numbers of people who refuse to be coerced into getting the vaccine.  In  Israel, there is talk of rolling out legislation to make the vaccine mandatory in certain workplace sectors, including, for example, healthcare, restaurants, hotels and other public-engaging enterprises.

There are certainly those in Israel who oppose the vaccine rollout and refuse to be vaccinated.  Numbers are especially high  among the Ultra-Orthodox, in some Arab towns and among other sectors.  But as the vaccine is rolled out and its efficacy becomes more and  more demonstrable, it will be less defensible for vaccine refusers to put themselves and others at risk.

I've kept the Israeli politics to a minimum this time as we still have a month  to go before the Israeli elections.  I will try to put together a pre-election primer a week or so before the election date and then some post-election reports.

Wishing everyone a Happy  Purim and, of course, the enjoyable thought that we are only a month away from the start of  Spring.    As the Hebrew song goes - "Great joy, Great joy, Spring has arrived and Passover (Pesach) is coming."  For all of those who change over their kitchens and host  Passover Seders, joy may not be the only emotion that comes up when we anticipate the arrival of the holiday.

Perhaps I'm getting a bit ahead  of myself but Passover is only about 5 weeks away.  For now, still time to enjoy Purim and the remainder of winter.

Best of health to everyone.

Posted by Ranana Reveller at 8:45 AM