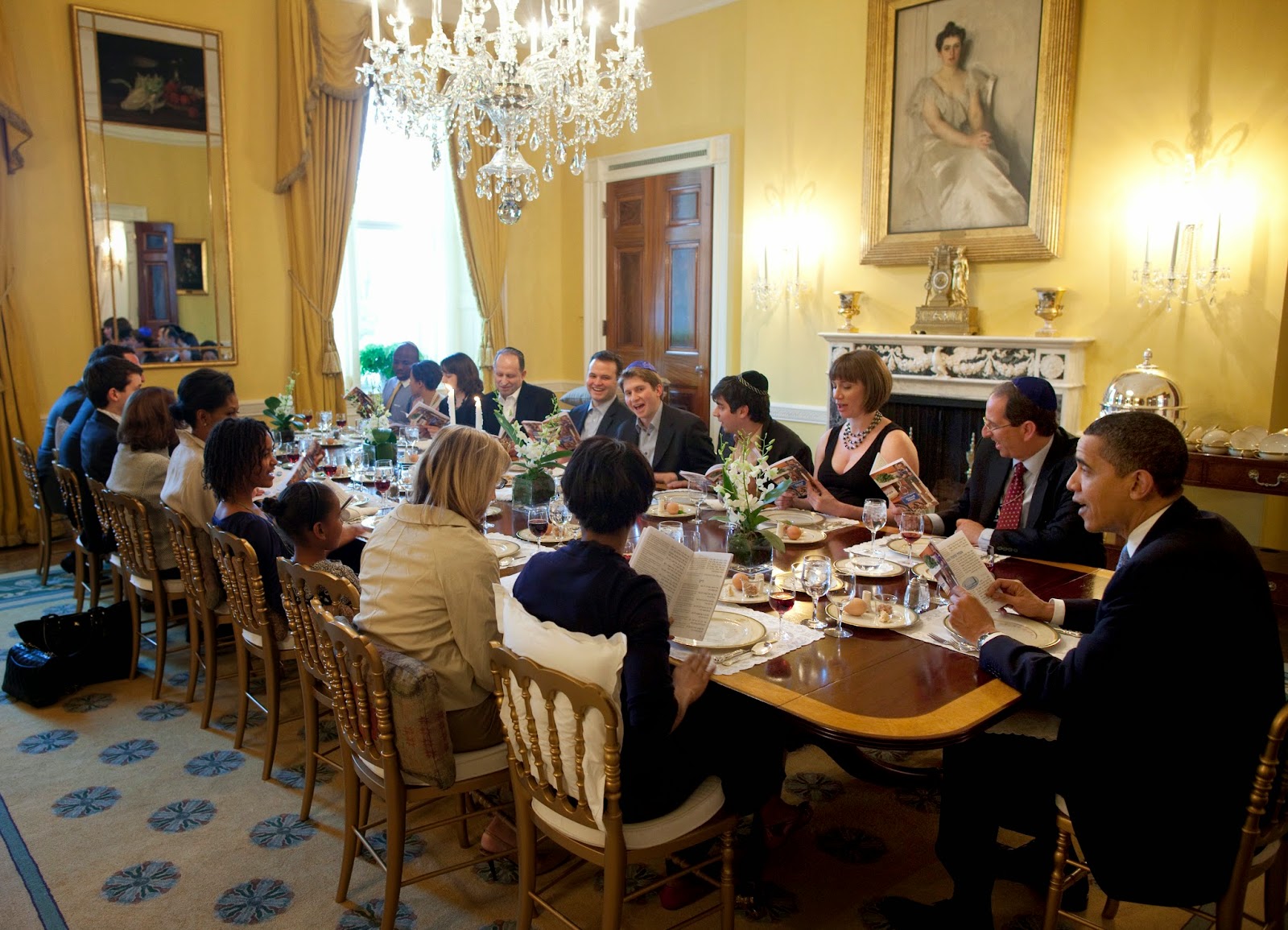 With the Passover Holiday approaching, the White House has been planning its annual Pesach Seder.  This year, the Seder will feature some new and interesting guests.

President Hassan Rouhani of Iran is expected to attend along with Iranian Supreme leader Ayatollah Ali Husseini Khameini.  The Ayatollah will be drinking grape juice rather than wine throughout the Seder (for religious reasons).  However, he is expected to propose a fifth cup to the "destruction of Israel," a theme he outlined in a recent tweet entitled "9 questions about the elimination of Israel."

President Rouhani and the Ayatollah will be seated next to Jeremy Ben-Ami, head of U.S. group "J Street."  They will be discussing the recent Israeli election results.

Canadian Liberal leader Justin Trudeau is planning to attend along with former Canadian Supreme Court Justice Louise Arbour (who has, in the past, repeatedly attacked Israel for alleged war crimes), as well as several other current and former Liberal MPs.  Prominent Liberal MP Irwin Cotler was apparently "unavailable."  Canadian Prime Minister Stephen Harper was not invited.  He has contacted Israeli Prime Minister Benjamin Netanyahu and asked if he could join him at a Seder elsewhere.

Some well known entertainers will also be in attendance in Washington.  Trevor Noah, the new host of the Daily Show will be attending.  He has prepared some new tweets for the occasion.  He has not yet tweeted them but he insists that they will be as entertaining and tasteful as his previous tweets about Israel and about Jewish people.  He will be seated with Pink Floyd member Roger Waters, a prominent BDS activist and several other entertainers.  Madonna was reportedly invited but declined the invitation as she will be attending a real Seder in Israel.

Israeli Prime Minister Benjamin Netanyahu was not on the guest list this year.  However, he will be attending an alternate, concurrent Seder in Washington led by Republican House Speaker John Boehner and several Tea Party members.  The Seder will be held a few blocks from the White House.  Speaker Bohner's group did not tell President Obama about the concurrent Seder or about its guest list.  However, they insisted that this was not, in any way, a politically motivated event.  The Boehner group will open the Seder with readings from the book of Revelations (speaking about Gog and Magog and the coming nuclear war) and will be featuring a special fifth cup of wine with the hope of  bringing Iran out of slavery and into a period of freedom.

Finally, the Chief Rabbi of Israel was invited to attend the Presidential Seder.  He was not able to attend but he did offer a blessing instead:  "May God bless President Obama and keep him far away from the Jewish people."  I guess he had recently been watching Fiddler on the Roof.

Chag Sameach and Shabbat Shalom to everyone.