My Promised Land: The Triumph and Tragedy of Israel - Ari Shavit - Review 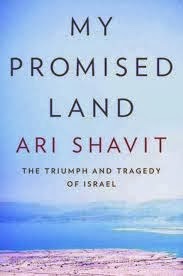 With a bit of extra time this week, I had the chance to read My Promised Land by Ari Shavit.  I really enjoyed it.

This book is not an academic history of Israel.  Rather, it is a collection of historical moments and a discussion of selected socio-economic and cultural issues.  It is woven together in a very personal way, through a compilation of interviews, family anecdotes, and some historical and philosophical musings.  The writing is beautiful.  At times, the book is captivating, and at other times, challenging and graphic.  But overall, it offers a great deal of discussion points over the future of Israel, of Zionism and of Israeli-Arab and Israeli-Palestinian relations.

Shavit travels through time, selecting historical events that he views as essential landmarks in his conception of Israel's history.  Along the way, he takes readers through, in great detail, stories of Zionist community building in pre-Israel Palestine, Israeli-Arab and Israeli-Palestinian violence, the 1967and 1973 wars, the development of Israel's nuclear program, the creation of the first post-1967 settlements in Judea and Samaria and numerous other events.

Shavit spends time discussing Israel and the project of Zionism with a wide range of people, in a manner that it is somewhat reminiscent of Amos Oz's great 1993 book, In The Land of Israel. Unlike Oz, most of Shavit's subjects are "movers and shakers" rather than everyday people who the writer might happen to come across.  As Shavit describes it, he might be meeting up with some of these people in a high end Tel-Aviv condominium or on a yacht somewhere.  Nevertheless, I found his treatment of most of these people to be quite fair, including those who he disagrees with wildly.  He presents interviews of leaders of the settlement movement, Israeli business tycoons, an ultra-Orthodox political leader, former Israeli military heroes and former leaders of the Israeli left.  He also visits with, for example, the owner of a hedonistic Tel-Aviv night club, the scientists involved in Israel's nuclear project and an Israeli-Arab judge, to name a few.  Sure, any book like this is bound to be extremely selective.  But that is the nature of this type of work.  Overall, it is a reasonably wide collection.

One criticism that has been offered is that there are very few, if any, women interviewed or even mentioned throughout the work.  Another is that perhaps the Palestinian representatives with whom he meets are presented too one-dimensionally.  Some on the left oppose what they perceive to be Shavit's ultimately apologetic tone towards historical Israeli military excesses, particularly in the founding of the State and in the post 1967 years.  Some on the right portray Shavit as naive and unacceptably harsh towards the settler movement and Israel's religious Zionists.  There may be some validity to some of these concerns.

More substantively, in my view, the book does not really include a serious discussion of the secular-religious tensions and issues in Israeli society or the topic of religious pluralism.  While there is a discussion of Aryeh Deri and the Shas party, which seems to be relatively sympathetic overall, Shavit does not delve into the religious underpinnings of Zionism, other than to dismiss religious Zionism as a post-1967 construct of the settlement movement.  The reader is left with little sense of the basis for Shavit's Zionism, other than a form of post-Holocaust nationalism - or perhaps prophetic nascent pre-Holocaust Jewish nationalism as well (rooted as a response to pre-war European anti-Semitism).  But Shavit offers no compelling reason why today's youth, about which he raises serious concerns, should adopt the old style Zionist outlook other than as an existential defence mechanism.

The book covers a great deal of ground.  It looks at the experiences of many different Holocaust survivors and considers how that type of background shaped so much of Israeli society, as well as the manner in which Israel treated Holocaust survivors in Israel's early years.  It looks at the tragedy that befell so many Palestinian families as the State of Israel was established, though Shavit tries to take a balanced approach to some of these historical events.  It looks at some changes in Israeli political cultural, though there is very little discussion of the huge impact that Menachem Begin had in changing the Israeli political landscape.  It looks at the growing Israeli-Arab population and the issues that Israeli faces in finding the appropriate way to treat a minority population in a Jewish democratic state.

Ultimately, Shavit raises questions that reflect a number of schisms that Israel faces internally and externally.  These different challenges - Israeli/Palestinian, Ashkenazi/Oriental (as Shavit puts it), Ultra-Orthodox/Secular, Settlement movement/leftists, are all discussed through the lens of certain personalities and Shavit's own outlook.  To spoil the conclusion, Shavit does not really offer a prescription. He presents these various urgent challenges and concludes by wondering whether Israel will succeed in overcoming them.  There is some optimism but the challenges are daunting and the future is painted as cloudy, probably heading for a major storm.

Most of the discussions are rational and well argued and most of the conclusions make sense.  But many questions remain and perhaps that is what makes the book such a worthwhile reading experience.

Posted by Ranana Reveller at 12:01 AM