Like Dreamers: The Story of the Israeli Paratroopers Who Reunited Jerusalem - Yossi Klein Halevi - Review 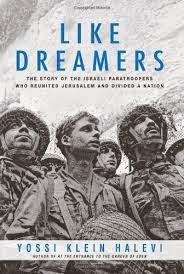 As a bit of a counterpoint to the book I last reviewed (My Promised Land by Ari Shavit), I made my way through Yossi Klein Halevi's latest book, Like Dreamers:  The Story of the Israeli Paratroopers Who Reunited Jerusalem and Divided a Nation.

Halevi's book is a lengthy piece of Israeli history, primarily covering the period since 1967.  Halevi tells this story by looking at the personal lives of a group of seven elite Israeli paratroopers who were involved in liberating Jerusalem from Jordanian occupation in 1967 and their lives after this war.

The early parts of the book describe the backgrounds, personal lives and views of these different individuals.

The book then becomes quite intense with detailed descriptions of battle.  It is graphic and moving.  Halevi covers the 1967 war, the war of attrition between 1967 and 1973 and then the Yom Kippur war of 1973.  He describes a number of battles, details many of the lives of fallen soldiers as well as the wounded and gives some glimpse into the various political events that were also occurring.  The description of the events leading up to the Israeli capture of the Old City of Jerusalem and the arrival at the Kotel of the Israeli troops is particularly exciting.

From 1973 forward, a great deal of the book is a discussion of the emergence of Gush Emunim, the settler movement.  Halevi chronicles some of the key personalities involved in establishing Israel's West Bank settlements (Judea and Samaria) and the political battles that they fought.  Much attention is given to Ofra and to Gush Etzion.  Halevi also covers the growth of religious Zionism in Israel, often quite sympathetically.  He traces the rise of right-left political tensions in Israel, particularly over the issue of settlement development.  He deals with a wide range of events including the election of Menachem Begin, the Sadat visit to Israel, the assassination of Prime Minister Rabin the failure of the Clinton-brokered peace process.

The book is plodding at times.  Unlike Shavit's book, it is not particularly poetic, nor is it consumed with moral dilemmas.  Halevi provides a much more sombre view of history, even though he certainly describes some moving and gut wrenching events.

Despite the title of his book, Halevi raises fewer questions and offers much milder criticism of Israeli policy and of various historical events than Shavit.  In fact, even Halevi's account of Baruch Goldstein's murderous mosque attack seems somewhat sympathetic.

Where Shavit's idyllic Zionism is the cultural-historical Zionism created by secular, even anti-religious pioneers, Halevi describes a Zionism in which Judaism and Jewish culture occupy a much bigger place at the heart of the Jewish state. There is more content to Halevi's version, which is obvious and evident from his choice of Jerusalem as the central starting point for his book.

At the same time, Halevi's history is in many ways a much narrower one which overlooks the Palestinian viewpoint that Shavit tries to address empathetically.  That is not necessarily a deficiency of Halevi's book, which is quite a different type of history.  But Halevi's book lacks a certain breadth or sense of completeness, even within the more limited period that it covers.

Posted by Ranana Reveller at 12:52 PM