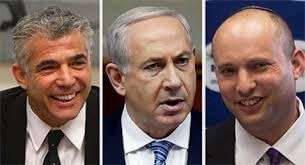 The Israeli coalition talks are all but completed and the different parties are expected to sign a coalition deal very shortly.  Assuming that the deal gets signed, Israel will have a new government just in time for the visit of President Obama.

In some ways, this could be one of the most change-oriented governments that Israel will have seen in a long time.  There are some very exciting possibilities.

The Israeli government, so far, will be made up of Likud-Beitenu (31 seats), Yesh Atid (19 seats), Habayit Hayehudi (12 Seats) and Hatnuah (6) seats for a total of 68 seats in the 120 seat Knesset.  The biggest sea change is that this will be one of the few governments in Israel's history without an ultra-orthodox party in the government.  For many years, the ultra-orthodox parties, representing somewhere in the range of 15% of the population, have held the balance of power.  They have been able to extract huge concessions including financial support of Yeshivot, control over rabbinic affairs in Israel, exemptions from military service, preferential housing arrangements and many other terms.  If this new coalition holds together, many of these deals are about to come unraveled.

Yair Lapid campaigned on a platform of making significant changes to domestic policy.  Many Israelis doubted that he could achieve very many of his goals and were quite pessimistic given the way Israeli governments have been managed historically.  However, if the coalition talks are any indication, Israel will see some very significant changes quite quickly.  Lapid withstood enormous pressure from Prime Minister Netanyahu and from the ultra-orthodox.  He managed to come up with a coalition agreement that included major concessions.  The ultra-orthodox will no longer be exempt from the army and mandatory service for all Israeli men will be reduced from 3 years to 2 years. Lapid's party will control the Ministry of Education and the Ministry of Finance. This means that here will be major educational reform - including mandatory secular subjects for all Israelis.  Budget allocations to ultra-orthodox institutions will undoubtedly be reduced dramatically.  Lapid has also indicated that he will pushing to change, liberalize and modernize the relationship between the state and its religious groups.  In other words, he will aim to reduce the power of Israel's ultra-orthodox rabbis and emphasize pluralism, greater equality and opportunity for liberal streams of Judaism.  There are all kinds of possibilities here, ranging from better treatment of Conservative and Reform Jewish organizations, changes to how the Kotel is run, changes to marriage, divorce and other laws and changes in many other areas.  The religious character of Israel is about to undergo a major transformation.  If Lapid can continue to deliver in many of these areas, his support will grow dramatically and he may even wind up forming the next Israeli government.

Lapid could not have achieved all of this alone.  The other big winner in these coalition talks has been Naftali Bennett.  Although Bennett is painted as a right wing extremist in some areas, he proved to be very pragmatic in working with Lapid in these coalition talks.  He solidly supported the notion of universal mandatory service and many of the other platforms that Lapid has put forward.  Bennett has even called for the institution of Sunday as a second day off for Israel so that Israel can move to a 5 day work week.  Bennett proved that he was a man of his word and he stuck by Lapid even has Prime Minister Netanyahu did everything he could to break the understanding that Lapid and Bennett had.  Bennett was a major victor in these coalition talks.

From a domestic perspective, it seems to me that this could turn into one of the best governments that Israel has ever had.  It looks like it will be a government committed to trade and investment, education, improvements to health and medical care, technology and significant liberalization of Israeli society in many areas.

However, there are also major challenges.  Netanyahu also included HaTenuah, led by Tsipi Livni, in the government.  Livni is committed to beginning new peace negotiations with the Palestinians immediately and she is supported in that area by Lapid.  Netanyahu also agreed to this as a term of Livni joining the government.  However, Bennett, based on what he has said so far, is adamantly opposed to having Israel make any concessions.  So with respect to peace talks with the Palestinians, it is unclear what this government will do.  If Bennett decides to take a pragmatic approach, as he showed that he can do in these coalition talks, there may still be opportunities for this government to take some bold steps and try to reach some kind of deal with the Palestinians.  Lapid and Livni are certainly willing to take these steps, though it is unclear whether Netanyahu (and Bennett) are willing to join them.  In any event, the flip side is that the Palestinians will also have to make significant concessions to get a deal.  It is quite clear that this government is not about to make any concessions on Jerusalem, nor is it about to leave the major Israeli settlement blocs in the West Bank.  These areas will almost certainly be annexed by Israel even if that is part of some kind of land/territory swap.

In some ways, this government is a big defeat for Prime Minister Netanyahu.  He was unable to keep the ultra-orthodox in the government after they have supported his party for so many years.  He lost more ministerial portfolios than he would have liked and he even agreed to reduce the size of the cabinet down to 22 members from a high point of more than 30.  In fact, he was forced to make concessions in almost every area that Bennett and Lapid demanded.  This was a major lesson in humility for a Prime Minister who was in such a stronger position after the previous election.  However, he is still the Prime Minister and he will still have a great deal of power.

The new government must also be seen as a major defeat for Shelly Yacomovitch and the Labour Party.  Rather than join in these talks - and try to work with Lapid and his centrist ideas, Labour opted to take the position that they would refuse to join the government under any conditions.  They missed a tremendous opportunity to be a part of what may shape up to be a very progressive government.  As a result, if Lapid is successful, it seems to me that Labour will face a significant decline in popular support by the next election.  Labour would be better off ousting its current leader and joining this government as part of a national unity coalition, while they can still get some reasonable concessions.

The new government is also a huge defeat for the ultra-orthodox parties who will sit with Labour in the opposition benches.  In a way, there was not much that the ultra-orthodox could do after the election results.  Lapid wound up with more power than the ultra-orthodox and he was prepared to use it - unlike many Israeli politicians in the past.  The Haredi parties have tried to paint this is some type of "anti-Haredi" movement - even hatred of the ultra-orthodox.  I don't think that is really the point.  For years, the ultra-orthodox have played the system, held the balance of power and extracted enormous concessions, all of which have affected Israelis across the spectrum.  This is now an opportunity to try something different - a government without ultra-orthodox - which will have the chance to change things around.

Overall, Israel faces many different challenges - ranging from existential and military challenges posed by Iran, Egypt, Syria, Turkey, the Palestinians, Hezbollah and various other hostile neighbours to the challenges of increasing world isolation and in some cases (like with Turkey), outright anti-Israel hostility, even bald anti-Semitism.  Israel also has a wide range of domestic challenges including its national debt, the growing gap between rich and poor, the very high cost of living and the tensions between the ultra-religious, the religious and the secular.


Posted by Ranana Reveller at 1:20 AM