I wound up with another Toronto to Tel-Aviv flight on US Air via Philadelphia. The flight is not bad – and it is probably better than some of the other alternatives if you cannot take a direct flight on Air Canada or El Al.

Leaving Toronto from Terminal 1 is not too bad. However, since you have to make a connection through Philadelphia, you have to clear U.S. customs at Pearson Airport. This can add quite a bit of time. If you are going to do this often, it is probably a good idea to get a Nexus pass and bypass most of the line-up. Otherwise, allow for some extra time and patience to clear U.S. customs and immigration.

The Toronto to Philadelphia leg is operated by Air Wisconsin. It’s a small plane and the ride is only about 1 ½ hours. Since you have already cleared U.S. customs – at least on the way to Tel-Aviv – the baggage is checked right through. On arrival in Philly, there is a shuttle bus to take passengers from the remote Terminal F to International Terminal A. Fortunately, if you take the shuttle, you do not have to clear general airport security a second time. The connection is decent with about a two hour holdover time.

At Terminal A in Philly, you do have a special gate for Tel-Aviv passengers with an additional security layer – much like the change-over in Frankfurt (via Lufthansa) or in some other cities.

I managed to stop at the Envoy lounge before heading to the secondary Israel-only security. The lounge offered free wi-fi and some fruit and cheese along with a choice of drinks. It was comfortable enough but the food was quite limited.

The actual flight from Philly to Tel-Aviv is about 10 hours. The crew were reasonably efficient but somewhat aloof. US Air, like many of the other U.S. airlines is pretty cheap with its passengers. They charge for alcoholic beverages (unlike El Al or Air Canada - for now, anyways). $7 for a glass of Chilean wine, which is probably the cost of the whole bottle, if it is even that expensive. The plane, an Airbus 330, is equipped with personal video screens, music, games etc., U.S. Air charges $5 for a pair of headphones if you have not brought your own. If you are flying often, noise-cancelling headphones are indispensible, so I woudn’t have used the U.S. Air cheapo air buds, even if they were free. 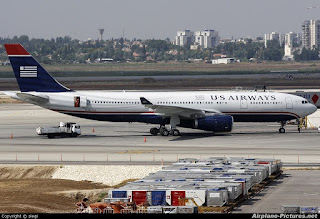 I tried to buy a duty free item on board. I asked for the Johnnie Walker Blue Label, which was listed at a great price. I was told that they usually have only one, maybe two bottles per flight and they sell them out in business class. Same story for the cognac and premium Vodka (Grey Goose). So don’t count on being able to buy anything from the U.S. Air duty free service, even though the catalogue has a reasonable selection.

For me, the main reason for taking this flight was the timing. It left Toronto at 6 p.m. instead of 5 p.m. which gave me an extra hour that I really needed as compared to Air Canada. As well, the flight back from Tel-Aviv leaves Israel at 11:15 p.m. or so, giving you a night flight rather than Air Canada’s dreaded all day flight back from Israel.

Since U.S. Air is a Star Alliance partner, you can still get Aeroplan points and get all the perks of elite/super-elite status except for the upgrades. It’s certainly not as convenient as a direct flight but Air Canada’s schedule is not as good as either U.S. Air or El Al. The problem with El Al is that the Matmid program (El Al’s frequent flyer program) can’t begin to compete with Aeroplan, at least under current rules. So if you flying Toronto to Tel-Aviv and you can’t take Air Canada because of bad timing, your next best choice is to fly Continental or U.S. Air if you still want full points. With some of the other airlines, like Lufthansa or Austrian, you might only get half the points. 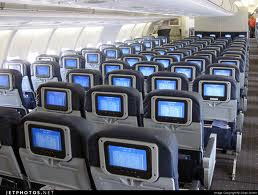 Posted by Ranana Reveller at 7:15 AM