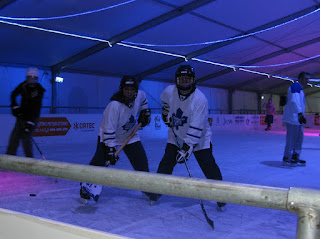 I played ice hockey again in Israel – but this time in Jerusalem! Sounds impossible? After all, there is no ice rink in Jerusalem. While that’s generally true, this year the city tried something a bit different. It opened an outdoor ice rink at Kikar Safra – Jerusalem city hall square – from March 10 to April 14, 2011.

The ice is a stated size of about 200 square metres – much smaller than an official hockey rink. Because it is makeshift – there are low boards – which are rather flimsy. The surface can’t support a Zamboni – so everyone has to pitch in – scraping snow off the ice before and after usage.

But despite the limitations – the Israeli Recreational Ice Hockey association organized a series of shinny games – over the time span – on Thursday, Saturday and Sunday evenings.

You have to book in advance to play – a total of about 8 players per team – 3 and a “goalie” on each shift. This is shinny hockey – so no raising the puck – and most players came with only a stick and skates – a few with gloves. The City has skates available for rental for pleasure skating during the day.

The whole ice area was enclosed in a giant tent – which has kept it quite cool – and usable – though somewhat choppy and uneven. Despite its limitations – it gave the players the chance to come play ice hockey somewhere much closer than Metullah for players from central Israel and Jerusalem. The choppy ice and the pick-up type game gave the players a feeling of old fashioned outdoor ice – which is a very rare experience here in Israel.
Posted by Ranana Reveller at 8:18 AM

Email ThisBlogThis!Share to TwitterShare to FacebookShare to Pinterest
Labels: Culture and Entertainment, Sports