When I was younger, my aunt and uncle ran a corner store in Montreal.  Neighbourhood residents would come by and pick up most of their staples - fresh bread, cheese, meat, fruits and vegetables and dry goods.  The neighbours would spend some time talking to my aunt and uncle, who learned to speak a number of different languages - at least enough to have animated street conversations.  Over time, in Montreal, as with many other North American cities, these small, family run corner stores gave way to the spread of 24 hour supermarkets. and convenience stores.  While there are still "convenience stores" across North America, few people would think of making a full shopping order in one of these places.  Even fewer probably spend much time speaking to the proprietors.  There is a social disconnect in these modern convenience stores which engenders very little neighbourly communication.   Sometimes, this might be due to a language barrier.  Convenience store owners and workers in North America are often immigrants who have little facility with the English language.  Other times, there is simply a class or social gap that serves a communciation barrier.  In any event, there are few big cities left in which there is a culture of widespread family run corner stores with socially engaged clientele.

That reality is quite different from the situation in many Israeli towns and cities, where the family run corner store - the "makolet" is still ubiquitous.

Take as one example, our neighbourhood in Ra'anana.  Just around the corner, the "Liat Market" is packed with patrons early in the morning and again towards the end of the day.  Many local residents come by every day to pick up fresh bread, milk, eggs and other products.  The proprietors are on a first name basis with most of the customers.  It is not unusual to hear Eli, one of the co-owners, chatting with different people about soccer games, politics, recent news events or other topics including their personal family situations.  Like in many of the other corner stores across Israel, the owners run a credit system for the customers and keep track of purchases made by any members of the family (including their young children) on index cards.  They collect at the end of the month, if they can...But even if some customers require credit extensions every now and then, there is a certain trust to the relationship and a confidence that they will get paid eventually.  I am sure that most customers reciprocate this trust by paying in timely fashion, even though there are certainly exceptions.

Until relatively recently, the options were credit or cash, though now the owners moved to a computerized system and began accepting credit cards.  Like with the old style corner stores, such as the one that my aunt and uncle used to run, the owners get to know quite a number of the customers well.  There is a definite sense of a common social fabric.  This is partially due to the general Israeli openness and the way in which people interact across the country.  But it is also a product of a culture that still values the local corner store and its benefits, including the close personal relationship with the owners.  Baked goods, the daily newspapers and the dairy products are all delivered, fresh, early in the morning and many people use these really fresh goods for their breakfast or their packed lunches for themselves or for their kids' school lunches. 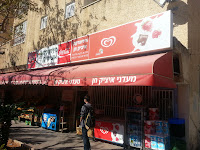 These makolets are so popular, that they are everywhere.  Within a five minute walk, there are at least of three of them in our Ra'anana neighbourhood and many more nearby.  Things can even become quite competitive between the different owners.  So while the Liat Market, nearest to our place, does not sell fresh fruits and vegetables, there is a competing makolet just just down the street.  Yitzhak Hen's Minimarket has a wide range of fresh produce.  He also opens up at 6 a.m., an hour before Eli to get that competitive edge.  Like the owners of Liat Market, Yitzhak and his wife are friendly, outgoing, personable and helpful.  They joke around with their customers and they won't shy away from a discussion of just about any topic.  Some people in the neighbourhood are fiercely loyal to one owner or the other.  But by and large, the owners of both makolets have wide ranging social connections with many of the neighbourhood residents, many of whom walk over in the morning from nearby their nearby condominium,  apartment buildings or private homes.

While these are only two examples, I have seen these makolets all over the country, in large and small cities and towns.  This "makolet culture" is a reflection of a number of aspects of life in Israel.  It captures the warm and close social interaction that often takes place between retailers and customers, when they are not angrily negotiating over the appropriate price of an item.  It also captures the lack of a hard social barrier than can often exist in North America between store owners and their patrons.  And while watching people pay for goods in the makolet, often by way of credit, with payments for larger orders divided up over a number of installments, you get the sense that the makolet is also represenative of the way in which many retail transactions are conducted.

Overall, these makolets are throwbacks to the corner stores of years ago in many large North American cities, like the one that my aunt and uncle ran for so many years.  But unlike the situation in North America, there seems to be little likelihood that these makolets will vansih anytime soon.  They are far too ingrained in the social fabric of the country.

Posted by Ranana Reveller at 8:33 AM