Gender equality issues have been percolating through the media in Israel over the past few months. For Israel as a democratic country, the trend is somewhat disturbing. The impetus for some of these issues has been the increasing power of the religious right, and sometimes a confluence of interests between Haredi (ultra-Orthodox) and other “mainstream” Orthodox groups. Israel is not alone in wrestling with these issues. Western democracies with any level of constitutional protection are finding that one of the major legal battlegrounds is the clash between minority religious rights and gender equality. These issues are being addressed in France, Canada, the U.S. and many other countries. The difference in Israel is that the Jewish character of the state often veils protection for religious rights and provides enhanced protection to the fundamentalist side of these disputes. Most recently, this has increasingly come at the expense of equality rights.

A few months ago, there was an incident that drew significant publicity in Israel. A number of religious male cadets left an Israeli Defence Forces event because the event included public singing by women, something that is viewed as prohibited under ultra-orthodox tradition. In another military event, a group of female soldiers were asked to leave a Simchat Torah celebration and go to a separate area, so as not to be with the male soldiers while they were dancing. These incidents have raised a great deal of concern in a country in which women have fought so hard to obtain and ensure greater equality of opportunity in the military. These issues led to major rallies across Israel on November 11, 2011 at which large groups of protesters, led by women’s organizations, rallied for the right to “hear the voices of women” in society. 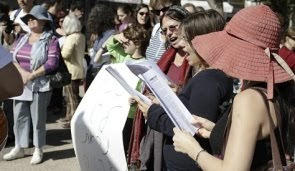 Another battleground has been Jerusalem. Haredi groups have been defacing billboards that included pictures of women. Advertisers have yielded to some of this pressure and increasingly avoided using pictures of women in Jerusalem advertising. The Haredi community also attracted significant attention when it divided the streets of Mea Shearim in Jerusalem for the festival of Sukkot, with women only allowed on one (narrower) side of the street.

Israeli law has already, for years, provided a two track legal system in relation to family law. People with divorce or other domestic legal issues can go the rabbinical authorities to have their disputes adjudicated. Good luck getting a just resolution in a rabbinical court if you are a woman. After all, women are not even considered proper witnesses in many areas of Jewish law. Fortunately, parties have the option of bringing disputes to the general court system. However, it is a race - since the Court to which the dispute is brought initially is entitled to take jurisdiction generally.

Most recently, in an example that actually favoured women’s rights, the Israeli Supreme Court unanimously upheld the conviction of former President Moshe Katsav for Rape and other instances of sexual assault. I have previously written about the lower court decision and won’t get into great detail here. But there are a few key points worth mentioning. Katsav took the position at trial that everything was fabricated and that he had no sexual relations of any kind with any of the victims. He provided various alibis, which were carefully examined by the three-judge lower court and were all found to be completely fabricated or otherwise unsupportable. On appeal, the main thrust of one of his key arguments was that the lower Court failed to take into account the possibility that he had consensual, romantic relationships with each of the victims. Is it surprising that the Supreme Court dismissed this out of hand?

Yet what have been truly amazing are the types of attacks that Katzav’s lawyers and supporters have launched in the media against the Court’s decision. It seems that what has upset them so greatly is that the Israeli Supreme Court was willing to say non-consensual sexual contact and assault is a crime, even if came as a result of abuse of authority, breach of fiduciary duty and unwarranted pressure rather than as a physically violent attack. This seems to have been yet another fault line between orthodox and non-orthodox views of gender equality.

In countries like Canada, with its Charter of rights that enshrines equality (gender and other types), courts are more likely to favour gender equality over the rights of religious minorities, at least that has been the trend to date. But in Israel, given the state supported “Jewish character” of the state, and the lack of a constitutional document that enshrines equality, the challenge is significant, particularly as the percentages of Orthodox and Ultra -Orthodox increase.

In part the problem in Israel goes to defining “Jewish character.” The State has provided a monopoly over religious affairs to the Orthodox and Ultra-Orthodox. This applies to weddings, funerals, Kashrut (dietary laws), funding for synagogues and a host of other areas. As a result, the State directly and indirectly sanctions practices that dramatically discriminate against women. Orthodox synagogues have gender-separate seating and bar women from participating in services. Women are not called to read from the Torah, they are not permitted to lead services and, generally, their voices are not heard. 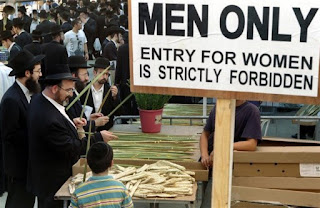 It is not too difficult to see a spill-over effect of these practices to views of gender equality in the rest of society. After all, how can men, who routinely justify the exclusion of women from a wide range of religious practice and participation, be expected to treat women equally as fellow professionals, work colleagues, teachers, bosses and employees?

It seems to me that this problem will only be addressed, not only in Israel but across the world, when synagogues, churches and mosques all enshrine equality and egalitarianism as crucial values. This has occurred in Reform and Conservative Judaism, in some Church denominations and some other religious groups. But these groups are generally still in the minority. For example, Reform and Conservative Jewish groups do not receive state funding in Israel, while Orthodox groups do.

To ensure equality in Israel, the State and the Courts will soon be called upon increasingly to make decisions that pit equality rights against religious rights. Will Israel continue to favour equality rights under growing demographic pressure? The State can begin now by eliminating the monopoly that it has provided to the Orthodox over many areas of Jewish law. If the political or legal will is not there, Israel risks increasing the Orthodox character of the State, which can only mean a slide closer to countries like Iran and Saudi Arabia and, of course, a disaster for gender equality.
Posted by Ranana Reveller at 4:38 AM