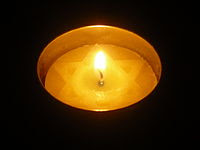 Aside from the importance of Israeli strength and Jewish resolve, and of the importance of the universalist fight against evil and intolerance, tonight and tomorrow, above all else, we remember the millions of victims who perished during the Holocaust, their lives and their stories, and the lives and stories of the survivors who were scarred for life.
Posted by Ranana Reveller at 5:44 PM 2 comments: