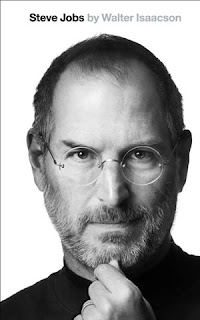 I had the chance to read Steve Jobs by Walter Isaacson last week on a lengthy flight. The book doesn’t really fit this blog thematically but I figure there are a few tie-ins. For one thing, I was able to get through this 571 page book on a 12 hour Air Canada day time flight between Israel and Canada. My other tie-in is more personal. Much of the book deals with Jobs at work and the manner in which he dealt with his employees, partners, co-workers and even family members. As an employment lawyer, these are the types of issues that I regularly address so I figured that this was another reason I should write about this book.

Early on, Isaacson includes a great deal of discussion about Jobs’ rebellious and anti-authoritarian nature. Jobs loved to play practical jokes on classmates, friends and teachers. (Does this sound familiar?). One of my favourite stories is the time Jobs and some friends came up with the idea of a “bring your favourite pet to school day” and proceeded to plan and advertise it without official sanction just to create chaos at school for a day with dogs and cats chasing each other around.

As a product of the times of the late 60s and early 70s, Jobs greatly enjoyed Bob Dylan music and dropping acid (LSD). He traveled to India to visit gurus and came back to North America wandering around barefoot as a vegan and self-described “fruitarian” at times. For a while, he apparently believed that with this type of diet, he would not develop body odour and could avoid regular bathing. People around him did not agree and were forced to raise this with him.

Even though this book was an "authorized" biography, Isaacson does not bury the unsavoury aspects of Jobs’ character, particularly the way he dealt with people around him. Some of these stories resonated with me, both as an employment lawyer who often hears similar stories and as someone who has worked with these types of outrageous characters. Jobs cheated his partners and employees out of money he owed them; he publicly humiliated his employees and colleagues, calling their ideas stupid (and worse) and heaped all sorts of abuse on them. He generally treated those around him in shockingly horrible fashion with nothing but contempt reserved for those he thought of as intellectually inferior.

Yet on more than one occasion, Isaacson explains away or otherwise excuses this behaviour. He writes that Jobs’ employees understood that he was building a list of exclusively “A list” employees and that this was his way of pushing those around him to work harder and achieve more. He suggests that the employees understood this and were happy with the trade-off. Those who were not up to the task or could not put up with Jobs were dismissed or quit.

In later sections of the book, Isaacson refers to Jobs as a “magical genius.” This is a recurrent theme, echoing the quote attributed to Leo Durocher that "nice guys finish last.” In other words, Isaacson seem to back the idea that the ultimate achievements of Jobs and of Apple overshadow any indiscretions in Jobs’ conduct or treatment of others. It is not expressly stated this way by Isaacson, but Isaacson’s message comes through quite clearly. It is one of the recurrent themes of the book. Do great accomplishments excuse or justify everything else?

I found the development of Apple and the treatment of many of the historical events in Apple’s history to be quite riveting. Whether dealing with how Jobs and Apple took advantage of Xerox early on, Jobs’ role in building Pixar or how Jobs personally oversaw and negotiated key aspects of iTunes, including his personal meeting with record industry executives and celebrity artists to get the rights to music for iTunes, much of this history is quite fascinating. Jobs’ successful efforts to persuade U2, Bob Dylan and ultimately even the Beatles to permit access to their musical catalogues are interesting and at times exciting.

As the book progresses and Isaacson deals with the newer Apple technology – the iPhones and then the iPads, there is a palpable sense of awe with these products with little critical assessment. After reading these chunks of the book, I began feeling the urge to run out and get an iPad II, and maybe even an iPhone as well (I have currently been using a blackberry)(I haven't done this yet...). Isaacson seems to blindly accept Jobs’ assessment that “Android (Google's competing operating system) is crap” and that Apple is on the right track in pushing the fully integrated closed system. Although this method has greatly benefited Apple to this point, it is not clear that the continuation of this type of system will allow Apple to hold the #1 spot indefinitely over Google or other tech companies.

It seems to me that the debate is much more complicated than that described in the book. Google has made and continues to make great strides with its “open” system. The Google type system may well be doing much more for human scientific advancement and technological access than Apple even though the wide range of different Google compatible products necessarily leads to a great variation in quality.

At the outset, I hadn’t really been sure that I wanted to read this book but it had received so much publicity that I decided I had to pick it up when I saw it in Costco. I found much of it quite interesting and generally enjoyed the story. It is well written (although at times a bit choppy, reflecting the speed of at which the book was published after Jobs died). It raises a number of issues and themes for discussion including the role of art and design in technology; different methods of invention; the purpose of technology itself and how to gauge what the public needs or wants; and whether success in business overrides everything, including morality and human kindness. On this last point, there are few, if any stories throughout the book detailing acts of kindness, generosity or goodwill on Jobs' part. Particularly given Job's enormous wealth, this is quite a disappointing indictment.

As well, the books details Jobs’ very difficult and ultimately losing battle with cancer. Very personal aspects of his illness and his treatment are examined including his decision to avoid surgery when cancer was first discovered and somehow hope that he could "will it away."

Jobs’ lifelong sense of personal abandonment is analyzed and traced to the fact that he had been an adopted child. This is used as another justification for Jobs' behaviour towards others. Yet this sense of abandonment did not prevent Jobs from doing the same thing when he was 23 – fathering a child and abandoning her. For a lengthy time period, Jobs denied paternity, even after a DNA test was conducted and showed a very high likelihood that this was his daughter. Ultimately, Jobs relented and provided assistance but his overall level of interaction with this daughter was relatively low.

The book returns to the clash between the openly rebellious youth of Jobs and the kinds of things he accessed and benefited from (His early “hacking” involvement with Steve Wozniak was in creating a machine that would crack telephone company codes and allow people to make free long distance calls) to his ultimate arrival at an end-to-end series of products, presented to users as a fait accompli with little room for innovation or challenge or the kind of questioning and hacking that Jobs embraced when he was younger. The limited range of options available in Apple products and the very limited ability for users to change the devices are reflective of Jobs' desire for control over everything with which he was involved from the employees and contacts with whom he worked to the consumers who bought the products.

After having finished the book last week, reading it cover to cover on one flight, I have continued to contemplate many of the issues raised. For that, I have to credit Isaacson. He has put together a study of Jobs and of this particular Apple that comes with more than a healthy dose of “food for thought.”
Posted by Ranana Reveller at 2:31 AM 2 comments: