International Day of the Girl: Israel and Gender Equality

According the Global Gender Gap Report, 2011, published by the World Economic Forum, Israel was ranked 55th in the world in gender gap issues.  This was more than 50 places higher than any other country in the Middle East/North Africa region, though the report notes that this is the worst performing region in the world in these issues.  So Israel was quite far ahead of an otherwise ignomious group. 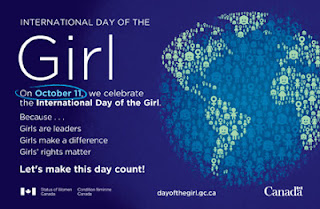 Since today is the "International Day of the Girl," I thought I would add a few comments about this issue.

According to the report, the gender gap in Israel has widened over the past few years with respect to pay differential (for equal or comparable work), political participation and even educational achievement.

A number of events have taken place in Israel over the past year or so that have raised awareness of some of these issues.  I have written other blog articles about some of them.  Receiving the highest publicity, Israel's past President, Moshe Katzav, is now sitting in jail after having been convicted of sexual harassment/ assault offences.  Other politicians have been investigated and or charged with similar offences.  While it is very troubling that these kind of occurences would be taking place in the Israeli President's office and other high level offices, at least some Israelis will see the positive side of this for Israel as a country governed by the rule of law and will take some comfort in the fact that Katzav was convicted and sent to prison.

There have also been a number of protests in Israel relating to "the exclusion of women," something that has been implemented in certain areas of Israel, primarily by ultra-Orthodox rabbis and their followers.  Whether in Meah She'arim  or in areas of Beit Shemesh, there have been efforts to keep women on a different side of the street, bar women's images from being used in public billboard advertising and bar women from singing or speaking publicly at certain events.  Although these  types of events are limited to certain sectors, primarily the ultra-religious, the number of incidents, as reported by various media, has been increasing and has reached other public spheres.  Organizations such as Be Free Israel and Women of the Wall have been fighting for gender equality in different ways, though it would be hard to say that Israel's current government has taken very many concrete steps to respond favourably.

In the religious sphere, most Israeli Conservative synagogues (called "Masorti" congregations in Israel) are fully egalitarian, providing equal opportunites for men and women to lead services and read from the Torah.  This is certainly the case for our shul, Hod v'Hadar in K'far Saba.  This is in marked contrast to the vast majority of traditionally Orthodox synagogues in Israel.  In the Orthodox Synagogues, women are seated behind a Mechitza (a barrier) and do not participate in leading services, reading from the Torah or playing any kind of active role in the religious services.  The nature of religious worship must play a role in how participants view gender equality issues more generally.  Masorti congregations are making active contributions towards reducing the gender equality gap.

In the military sphere, Israeli women are drafted to serve in the army just as men are.  Israeli women serve as pilots, officers and in many other capacities including some as combat soldiers.  I have not seen studies about this, but it seems likely that Israel's army is somewhat ahead of the armies of many other countries in the area of gender equality and participation even though the Israeli army, as with other armies around the world, tends naturally to be male dominated.

In the educational sphere, the Global Gender Gap Report, 2011 cites a significant gap between male and female educational achievements in Israel.  This was somewhat surprising and disappointing.  Certainly my experience to date in this regard is that my daughters, attending primarily secular schools, have been as actively encouraged to pursue studies in math, science and technology issues as has my son.   But this is only a limited experiential point, and I haven't had the chance to look at detailed gender educational statistics in Israel.

So as we mark the U.N's declared "International Day of Girl," the report card for Israel is somewhat mixed.  Hopefully, Israel will get back to its position in the top 35 countries in the world, a position that it held just a few years ago.  But this will require signfiicant progress in a number of these areas and it will need Israel to move towards a leadership position in addressing gender gap equality issues.  This will be a difficult challenge, particularly in light of the nature of the current Israeli government.   But with Israeli elections coming up shortly, there are a number of parties interested in pursuing these issues more vigorously.


Posted by Ranana Reveller at 7:29 AM No comments: