The Lies They Tell by Tuvia Tenenbom: A Review 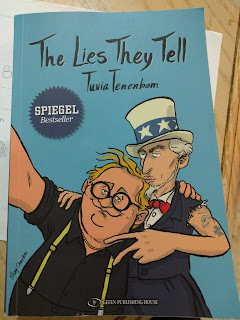 Tuvia Tenenbom's new book, The Lies They Tell, is a natural follow-up to his 2015 offering, Catch the Jew, which I reviewed at that time.  The writing style is the same but this time the target is the United States, rather than Israel.  Tenenbom sets out for a trip across the United States to meet people, ask difficult questions and gather material for his assessment of the current American condition.  The book was completed before the most recent election but many of Tenenbom's observations and insights were certainly prescient.

Over the course of his six month travels, he manages to visit quite a wide ranging section of the U.S., including Alaska and Hawaii, as well as a large number of states across the mainland. He meets and speaks with many different types of people including politicians, native American leaders, black and white Americans in all kinds of locations, church leaders and other categories.  He asks them pointed questions, and wittily summarizes the responses he receives with his running commentary.

This certainly makes for interesting reading in a style that is light, irreverent, entertaining and often, quite sarcastic.  Like Tenenbom's account of his trip across Israel, this is ultimately a pessimistic account, at times arrogant and even patronizing.  But it covers a great deal of ground in places where many readers may not have had the chance to visit.

Tenenbom describes his journey in open ended terms.  A curious adventure to meet all different kinds of people from Muslims, Jews and Mormons to rednecks, gang-members, religious conservatives and others.  Some of the book seems to fit the bill.  Daring to go where most people would not, Tenenbom amasses a fairly diverse range of interviewees.

That being said, midway through, I came to view this as more of a Socratic method journey, with questions that were intended to elicit certain responses as opposed to truly open minded discussions.

One of the interesting themes that Tenenbom aims to cover off is to categorize people based on a few select questions.  The obvious and easy first question is whether a person is "blue" or "red," in other words Republican or Democrat.  This type of starting question seems to get many of the people riled up and marks the discussion as a political one.  Some people will only express their opinion if Tenenbom agrees to hide their identity or not record the answers.  Others simply refuse to provide any detailed responses.

From there, many of the discussions proceed to questions about Israel/Palestine and questions about global warming and environmentalism.  It is a fascinating linkage that Tenenbom proposes, aiming to group people with respect to their views on these two issues along with their approach to smoking restrictions.

Although Tenenbom claims that he "hasn't made up his mind" on the question of whether global warming is real (as opposed to a cyclical phenomenon, that has not been specially affected by human beings), he finds a consistent linkage between those who wish to take action against it and those who claim to support "Palestine" when asked questions about the Israel/Palestine conflict.  Splitting these groups on a right/left line, he adds smoking restrictions to the mix.

Tenenbom clearly has little time for those who advocate on the Palestinian side of the spectrum.  He views American leftists as hypocritical on this issue. In his view, they call for action against Israel while ignoring so many other conflicts around the world that are far more devastating and while ignoring so many serious U.S.issues including poverty and race relations.  Some of this scorn is directed towards American Jewish liberal groups, who spend more time worrying about attacking Israel than about supporting and building their own American Jewish communities. Even though Tenenbom purports to be coming at all of this from the left of the political spectrum, much of his derision is aimed at the left.  Quite a bit of it seems aimed at Obama and Kerry in particular.

Tenenbom ties "pro-Palestinians" in with environmentalists and the anti-smoking crowd.  It is a strange leap and one that seems awkward, at best.  While Tenenbom's explanation for his Pro-Israel leaning is cogent and analyzed reasonably, he has no explanation for his leanings towards anti-environmentalism.  His dismissal of global warming concerns seems to be based on gut reaction to the environmentalist crowd rather than any logical discussion of the issues. (And he repeatedly reminds the readers that there is lots of gut...)

But his glorification of smoking is even less compelling.  Since Tenenbom is a self-described chain smoker, his assessment of many of the people he meets and places he visits seems tied to whether not they support or oppose smoking limitations.  So Seattle, a place with a variety of smoking restrictions is very inhospitable for him.  Heck, you can't even smoke in your hotel room, imagine that.  On the other hand, in parts of the southern U.S., you can apparently smoke wherever you like, so Tenenbom is much more at home.

As is evident in his first book, Tenenbom is somewhat of a narcissist.  His writing about some of his encounters is arrogant and even patronizing.  While he sometimes asks difficult questions out of interest, more often the questions are intended to attract a visceral, angry response.  He can then ridicule the subject simply by presenting the answers provided.

Tenenbom has very high standards for the type of food he is trying to find which goes along with his search for fine spirits, cannabis, places he can freely smoke and his mainly unsuccessful search for good coffee. There is also a great deal of discussion about his relationship with his car and about guns and gun control laws across the U.S.

Along the way, he also manages to visit a wonderful collection of American parks and natural landmarks.  Like in his previous book, these trips to beautiful sites (and to the really good restaurants) seem to be the highlights of his journey rather than the people he actually meets and the interviews he conducts, despite his protestations to the contrary.

In fairness, Tenenbom does ask some pointed questions of those on right, including the religious right and the very far right.  Even though people on the religious right often claim to be "Pro-Israel," Tenenbom digs deeper to try and see if he can get them to state that only those Jews who accept Jesus are destined to avoid eternal damnation.  He sometimes succeeds. His point is that the veneer of pro-Israel support on the right side of the spectrum often masks a deep rooted anti-Semitism.  He also has some less than favourable things to say about Trump and references his own left-leaning political convictions on several occasions.

Interestingly enough, Tenenbom visits very few Synagogues or other Jewish institutions but seems to be in a Church just about every Sunday (as well as many days during the week).  He greatly enjoys trips to black churches that he portrays as inspired, spiritually uplifting and meaningful.  He is far more critical of other houses of worship, including the Synagogue or two and the many Evangelical churches that he visit.

Overall, the book is entertaining and, at times, insightful.  There are many other interesting encounters with places and people that this review does not describe.  But there are certainly some nagging concerns about Tenenbom's logic.  The hazy clouds of smoke that constantly surround him probably fog up some of his choices on places to choose, people to meet and conclusions to draw.  For example, visiting a few centrist, pro-Israel Jewish organizations would probably upset his characterization of American Jews as a largely self-hating.

That being said, one of his pessimistic themes is that America is filled with liars - politicians, everyday people disguising their animosity towards others and people who are simply afraid to stand up for their political views.  He warns of an America that has not well integrated its diversity and seems headed towards a boiling point.    Written all prior to November, much of this assessment turns out to be all too accurate and provides yet another reason to consider Tenenbom's escapades.

Posted by Ranana Reveller at 3:00 PM