Catch the Jew - by Tuvia Tenenbom - A Review 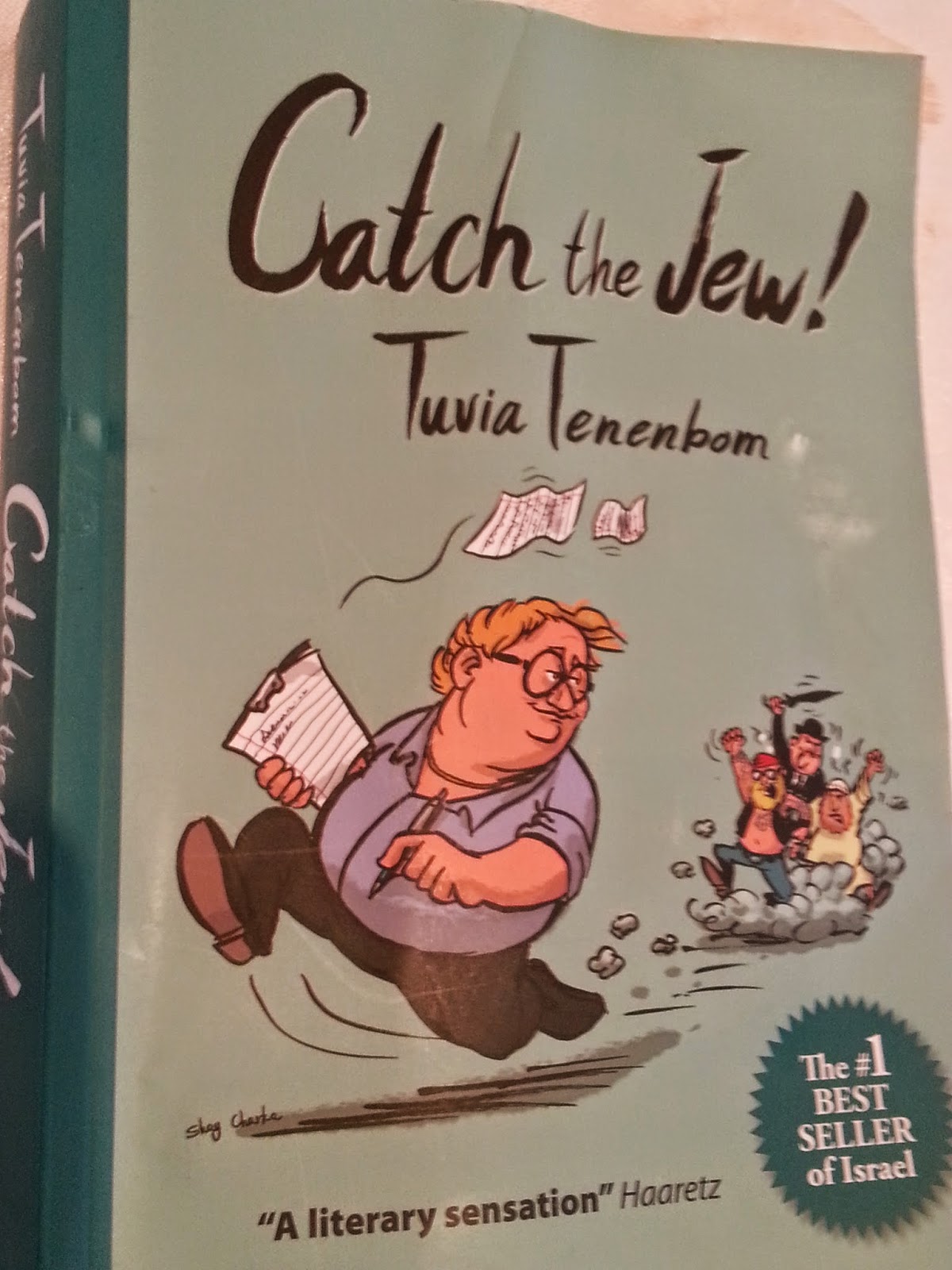 I had some time as I was travelling back from Israel to Toronto and decided to check out a relatively new book that has been selling well in Israel - "Catch the Jew" by Tuvia Tenenbom.  The book was written in Hebrew but I went for the English version.

Tenenbom has quite an interesting resume.  In his introduction, he describes himself as having been born and raised in an ultra-Orthodox, anti-Zionist home, groomed to be the next in a family lineage of rabbis.  His mother was a Holocaust survivor and he had an extensive ultra-Orthodox religious education.  He left that world completely and went to study in the United States, accumulating degrees in computer science, math, theater and literature.  From the book, it is apparent that he speaks English, Arabic, German, Yiddish and Hebrew.

In 2012, he published "I Sleep in Hitler's Room," a book in which he detailed his travels across German in the summer of 2010, exposing outrageously high levels of German anti-Semitism, as he saw it.  Now, Tenenbom was recruited, as he puts it, to travel across Israel and write a book about his travels.  Catch the Jew is a collection of chapters that summarize Tenenbom's interactions, observations and discussions with a very wide range of Israeli and Palestinian characters across Israel.  It is witty, irreverent, satirical, and well written.

Although I had a sense that this would be somewhat like Amos Oz's landmark 1993 book "Here and There in the Land of Israel," there were significant differences.  Tenenbom's book probably covers a wider range of territory, is significantly more cynical than Oz's and is even more pessimistic.  But it is also funnier.

Given Tenenbom's educational and linguistic background, he was able to disguise his identity, somewhat, to gain access to a wider range of subjects, who were apparently somewhat disarmed by the persona that he adopted.  So, while travelling throughout the Palestinian Territories and among Israeli-Arab communities in Israel, Tenenbom claimed to be "Toby the German" and spoke only English and German.  For other interviews, he could put on a kippah and attend a Friday night dinner with some ultra-Orthodox hosts, using his own real name, Tuvia Tenenbom. At other times, he would simply be Toby or Tobias the German reporter, to gain access to prominent Israeli officials, including members of Israel's Knesset, Palestinian Authority leaders and other writers and well known personalities.

Tenenbom delights in posing difficult questions to his subjects, many of which are apparently quite unexpected.  Although purporting to be a German reporter, highly sympathetic to the Palestinian cause, he still manages to ask Palestinian leaders some very uncomfortable questions about the "facts" that they provide him in the course of interviews and discussions.  Similarly, he asks pro-Palestinian NGOs all kinds of questions about the work they are doing, the claims they are making and their underlying motives and the answers are often quite fascinating.

Along the way, Tenenbom covers quite a wide variety of ground.  He spends some time with anti-Zionist ultra-Orthodox Rabbis and asks them about many different subjects. He interviews Israeli prostitutes and winds up asking them about their views about Sudanese refugees.  He spends some time with Israeli soldiers, wounded Syrians being treated in Israeli hospitals, Bedouins, Palestinians in Ramallah and Jenin and settlers in isolated West Bank settlements.  He also speaks to quite a number of Israeli MKs including parliamentarians from several different parties.

Ultimately, Tenenbom offers some very pessimistic predictions for the future of Israel and its society. But along the way, the book includes some very interesting sections.

One of Tenenbom's major targets is the whole range of left-leaning pro-Palestinian NGOs, often funded by German and other European countries as well as American donors.  He details the sources of the funds, the types of people working in these organizations and the rampant anti-Semitism that so often permeates these organizations.  His targets include the IRC (International Red Cross and Red Crescent), Doctors Without Borders, the New Israel Fund, Adalah and many others.  He exposes examples of falsified facts, doctored photographs and videos, hypocrisy, and other ways in which many of these organizations seem to be on a mission to delegitimize Israel. In one shocking example, he follows an Israeli born tour guide named Itamar taking a group of European "fact-finders" on a tour of Yad Vashem, the Israeli Holocaust museum, at the expense of the EU.  The tour guide uses the museum entirely for the purpose of trying to draw parallels between the Holocaust and modern day Israel's treatment of the Palestinians.  Tenenbom has nothing but scorn and outrage after debunking this type of ridiculous and baseless propaganda.

Tenenbom also attacks what he describes as self-hating Israelis, particularly those who, in his view, spend more time working to benefit the Palestinians than they do trying to improve their own lives.  He uses a number of exchanges with some of these leftists to demonstrate their lack of historical and/or biblical knowledge, or the difficulties with a black and white approach that they take to problems that are often far more complex.  Some of his harshest attacks are aimed at Israel's major left wing newspaper, Haaretz and some specifically named writers.  Another two page missive is aimed at Israeli writer Shlomo Sand.  (I reviewed one of Sand's book's on this site here in 2011).

It is worth highlighting this section for a moment.  Sand had recently published a book entitled "When and How I stopped being a Jew."  Tenenbom attended a gathering with Sand along with a number of left wing Israelis.  I couldn't help but include the last few lines of that section of Tenenbom's assessment:

"If you're a self-hater, if you have no capacity to love even yourself, how can you love anybody else? There ain't no room for love in your heart, man, and you had better start living with it.  As I sit here and watch these self-haters, I hear a voice within me asking: Is there anybody out there who is brainwashing these Jews to hate themselves?  Good question."

Some of Tenenbom's exchanges with Israeli MKs are quite amusing.  He ridicules Labor MK Merav Michaeli for a stream of drivel that comes out of her mouth when he asks her to speak about Israeli challenges and her vision for the future of society.  He is apparently much more impressed by Ayelet Shaked of "Habayit Hayehudi" party, who, in fairness, is far more coherent than Michaeli in these interviews.  Tenenbom's descriptions of meetings with other MKs, including Yitzhak Cohen of Shas and MK Meir Porush of Torah Judaism, are biting and derisive.

There are several themes that appear throughout the book even though this is not an essay or a polemic.  One theme involves the type of anti-Semitism to which Tenenbom is exposed as a German reporter when he is with Palestinians and European funded NGOs.  He details numerous pro-Nazi comments, and many other exchanges that are targeted far more at Jews as Jews than at any political issues.  Tenenbom also raises the very same  type of question that Israeli MK Avigdor Lieberman has been asking for years.  Why is it that in a Palestinian state - there should no Jews whatsoever (like in some other present day Arab states), whereas the state of Israel should accept and absorb even more Palestinian refugees in its half of the two state solution?  Why is a Zionist state "racist" but Muslim states and Christian states are not?  Tenenbom raises these questions with Palestinians, NGO workers and others but is not provided with any reasonable answers.

Another of Tenenbom's recurring themes is the enormous resources invested by Germany and other EU countries as well as investments by German donors to fund anti-Israel NGOs, anti-Zionist and anti-Israel films and all kinds of other anti-Israeli activities under the guise of "peace."   Tenenbom wonders about where else in the world the Germans and other Europeans are so involved in such activities and poses these questions.  He does not receive any reasonable answers.

These themes are strung together with many others in a collection of interviews that cannot be easily portrayed as "right" or "left" wing.  There are targets on both sides of the spectrum, right and left, Israeli and Palestinian, religious and secular.

Over the course of his adventures, Tenenbom writes repeatedly about his enjoyment of food, both Israeli and Palestinian.  Wherever he goes, he offers comments about the meals that he is served, and even nicer comments if it is accompanied by good whiskey or strong coffee.  Certainly in this area, it sounds like he would be a fun guest to have over for a meal, despite his incessant, self-described chain smoking.

But having read the entire book, I am hard pressed to think of very many positive things that he has had to say about any Israelis, on any part of the spectrum.  Some of his kindest words are for some hijab-wearing Palestinian women that he met.  He also seems to have quite a bit of admiration for Jirbril Rajoub, a Palestinian political and militant figure.  Tenenbom admires the fact that Rajoub has acted, unwaveringly, in support of his people.  It is precisely this characteristic that Tenenbom finds so sorely lacking among Israeli leftists.

If that were really his viewpoint, one might have thought he could find some centrist, or slightly right of centre Israelis that he could present favourably.  But those interviews are sorely lacking.

So ultimately the book is far more negative than positive, in its coverage of just about everything other than the beautiful Israeli landscapes, the food and, perhaps, the ancient history.  Although Tenenbom seems to be able to present a reasonably disarming nature to people he meets such that he is able to make friends and gain access, his condescending assessment of just about everyone he meets must ultimately leave readers wondering about the type of person Tenenbom really is.

When Amos Oz wrote his book, as biting as it was in parts, it was written by a person dedicated to working on the various challenges that Israel faces, as difficult as these challenges might seem.  While many Israelis might disagree with Oz on a whole range of issues, I would find it quite a stretch to describe Oz with language that is anywhere near "self-hating."  Not that Tenenbom says that about Oz, specifically.  But it is Tenenbom's general characterization of the Israeli left.

On the other hand, it is far easier to criticize everyone you meet as an outsider.  And then to leave and go back to New York or Germany and continue to pose as Toby the German, Toby the Christian or just Toby;  anything other than Tuvia the Jew or Tuvia the Israeli.

After finishing the book and considering the themes, as well as Tenenbom's self-described introductory background, I can't help but wonder whether the "self-hating" description is most aptly applied to Tenenbom himself rather than many of the subjects he interviewed.  Hard to say.  I tend to agree with his arguments regarding many of the subjects.  But the "self-hating" description is applied so liberally, to so many, that I started to wonder.


Posted by Ranana Reveller at 4:58 PM