Induction Day to the IDF...

It was an emotional day today as our eldest child, our daughter entered the IDF (the Israeli Defence Forces or צה"ל).  In Israel, there is universal mandatory conscription for 18 year olds, both men and women.  While some Israelis are exempt from military service, the vast majority serve for at least two to three years.

The  IDF is one of the more organized institutions in Israel, out of necessity, since Israel faces so many different types of threats.  High school students are tested, interviewed and screened for a whole range of positions.  Some of the more coveted positions can involve multiple interviews, physical and academic testing and even role-playing exercises.  Ultimately, many conscripts have a significant say in the type of service that they would like to peform.  Many recruits will learn a range of valuable and highly marketable skills during their service, some in sophisticated scientific, technical or computer related areas.  Many also develop a range of important leadership skills, especially those who become officers.

Many Israelis take a year off to travel after comleting their military duty and then look at options for entering university, college or looking at other career opportunities.  But this is all down the road... 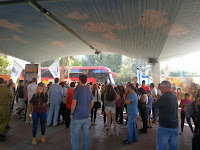 On induction day (יומ הגיוס), the conscripts are asked to show up at one of the IDF conscription centres.  The hundreds of 18 year olds entering the army are accompanied by family and friends to one of these large IDF bases.  Names are called out and the conscripts are asked to board a bus which will take them to the actual induction facility.  The newly inducted soldiers will then proceed to some type of "basic training," which can vary in length depending on the unit in which they will ultimately be serving.  Typically, basic training may last anyone from one to three months.  After basic training, the soldiers are dispersed to their assigned bases.

It is certainly difficult to see your 18 year old child entering the army.  But, sadly, it is a reality of life in Israel that the country requires a strong, capable and ready military, that is based on civilian involvement.  That is the price of living in the only Jewish country in the world - and being able to spend most of the time in relative peace, even while surrounded by hostile neighbours.  It is these young conscripts. along with Israel's full-time military personnel, who contribute so much to making that possible. 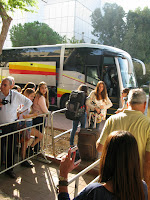 Israelis are hoping for the day when such a strong and active military will not be required.  But that day seems like a long way off now.  For now, we are forced to wish our kids an "easy induction" - a "גיוס קל" which is an all too common Israeli greeting.

We hope that our daughter's service will be rewarding and successful for her.  We also hope that over the course of her service, Israel and its neighbours will come that much closer to a more peaceful coexistence.  While there are few signs that this is likely, it would simply be too depressing to give up all hope.
Posted by Ranana Reveller at 5:24 AM