I went to a different kind of party last night - a "jamri" party.  What is jamri? (or pronounced "jumri?").  It is a yemenite food, similar to a pita.  It is made differently though.  The dough is much thicker.  The pita is cooked in a pan over a wood/charcoal fire - and it is also smoked from above.  The result is a very thick pita that is quite hard on the outside but chewy on the inside.  Because of the density, people only eat a small piece of it - along with other salads, appetizers and side dishes.  But at a jamri party, the jamri is certainly the main attraction. 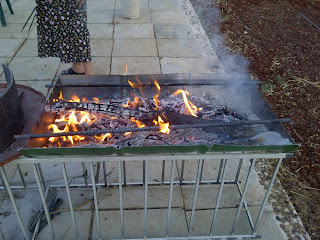 The first step is to prepare the fire - which can take a while.  You need lots of wood, some dry palm branches and the right type of unit for containing the fire, and preparing the jamri.  Here is a photo of a special "jamri maker," prepared for these occasions.  Getting the fire to the right stage can take an hour or more.  So if you are invited to a jamri party, don't count on eating some fresh jamri right away...unless it has been made in advance...


The next step is the cooking process.  The dough should be made in advance.  Unfortunately, I don't have the recipe to add to this blog, though I can try to get hold of it.  But the dough is placed in pans which are set on the fire.  The palm branches are used to smoke the jamri from above and harden it on the top. 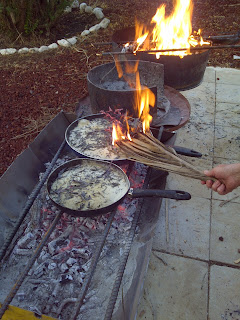 After that, the jamri cooks for a while, hardening on the outside and cooking to a chewable dough on the inside.  This can take a while, perhaps as much 20-25 minutes to get to the proper texture and consistency.

Finally it is ready - to be served with scramled eggs, zhoug (Yemenite hot sauce), tehina, salads and other side dishes.  Jamri is typically viewed as something to be served with dairy so there are no meat products at this type of event.

I was skeptical at first since the jamri was so hard on the outside and so dense.  But the inside really was quite tasty and well worth the wait. 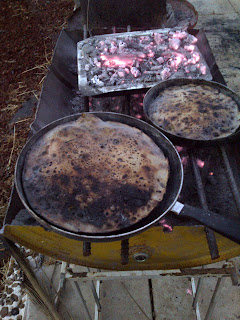 Here is a photo of the final product - just before it is served...

There are not many places in Israel where you can eat authentic jamri.  Though this was a traditional food eaten by Yemenite Jews who arrived in Israel in the late 1940s and early 1950s, only a small number of the next generation have learned how to make it.

So a jamri party is not only an opportunity to taste a unique dish that is not very common - it is also a chance to enjoy a rare Yemenite tradition that only some Yemenite immigrants have retained and transmitted.  Other Yemenite dishes, such as Jachnoon and Melawach are much more prevelant - even sold in frozen form in supermarkets across Israel and are likely to be available for quite some time.  But jamri requires special expertise and conditions to prepare.  Its future in Israel is much less certain unless some members of the younger generation pay careful attention and learn how to prepare it.
Posted by Ranana Reveller at 5:56 AM