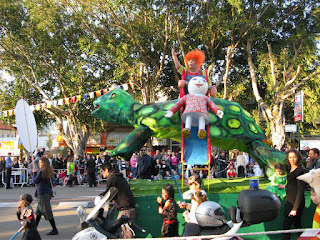 As the news is filled with reports of potential hostilities between Israel and Iran, we are celebrating the Jewish holiday of Purim. Purim is a holiday marking the victory by the Jewish community of Persia - which, though the bravery of the story's heroes, Mordechai and Esther, was saved from a plot by the evil villain, Haman, to destroy the country's Jewish community. Sounds familiar? Well, we'll leave the discussion of modern day Iran (ancient Persia) for another day...

Purim is one of the happiest holidays on the Jewish calendar. Throughout Israel, cities celebrate "Adloyadah festivals." "Adloyada" (literally - "until you don't know") comes from the tradition of having a bit too much to drink on Purim and celebrating wildly. But these are not drunken festivals. (Unlike the parties that many people are attending tonight and tomorrow...) Far from it. These are family oriented street parades, held in the centre of many of Israel's cities. 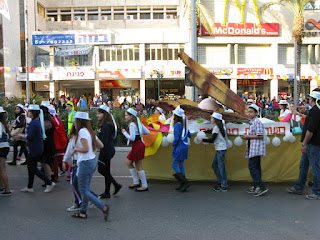 Ra'anana held its festival yesterday, the day before Purim began. The parade began at 4 p.m. All of the city's schools were represented with themed floats and a group of selected students marching along. Ra'anana, like most other Israeli cities, has a variety of school types - religious, secular, pluralistic, and special schools for art, music and sports programs. All of these different schools were represented. Thousands of people lined the main street, Ahuza Street, which was closed off to all traffic from about 3:30 p.m. The parade marched along Ahuza for about an hour and a half. 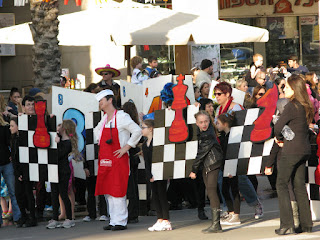 Meanwhile, the Ra'anana City centre ("Yad L'Banim") was turned into a giant dance club from the early afternoon. Students, who came to school in a wide range of costumes, were let out of school at noon. Thousands of kids made their way to Yad L'Banim, which was set up with a DJ, lots of security and a party atmosphere. The weather cooperated - it was a sunny 20C.

The holiday of Purim officially began at sundown this evening. Across Israel(and throughout the world), Jewish people went to Synagogue, community centres or other locations to hear a public reading of the "Megillah" - the Book of Esther - which is read from a parchment scroll. Israelis were also frantically preparing baskets of food and sweets to give out to neighbours and friends tomorrow - as is customary on Purim. Many Israelis are also participating in the Mitzvah of charitable gifts to the needy, another Purim custom.

Kids are off school for three days - Wednesday, Thursday and Friday - to celebrate this relatively "minor" holiday. But for many kids, the holiday is a favourite. Unlike a "chag" - a "holy day" - buses are running, stores and restaurants are open and there are no extensive restrictions on activities. Most people are working, at least a half day. People everywhere dress up in all kinds of costumes and there is a general carnival atmosphere. And to top it off - the temperature is predicted to hit the high 20s C by the weekend, marking a real change from the much needed rainy season that has soaked Israel over the past few months.

The festivities will be continuing all over the country for the rest of the week. There are Adloyadah festivals in many other cities on Purim and the day after. Purim officially begins with Megillah readings in the City of Jerusalem one day later than the rest of the world (and the rest of Israel) - tomorrow night. And Israelis will be celebrating with festive meals across the country in the afternoon on Purim day.

Because of the timing of Shabbat this year - kids will wind up having had a break from school from Tuesday at noon - until Sunday morning. For many kids, this is definitely the best part of celebrating Purim.