Written for lay people, Slayton’s book begins by describing the role and history of Canada’s highest court. It moves on to a discussion of some of the Court’s more controversial recent decisions, a look at its current members, a discussion of its clerks – and then ultimately, a call for change. Though I agreed with some of Slayton’s penultimate recommendations – I found the journey at times tedious – and at other times obnoxious – particularly the repeatedly cited mantra that the Supreme Court “runs your life,” which seems overly hyperbolic. 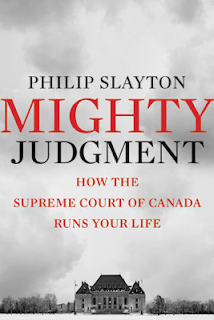 At the heart of any discussion of the role of the Supreme Court (whether it is Canada’s Supreme Court or any other) is the debate between those who would prefer an “activist” court willing to use its power to strike down laws that seem to run afoul of the Constitution (the Charter)and those who would have the Court play a much more deferential role towards Parliament. In Slayton’s discussion of some of the issues that the Court has wrestled with – such as abortion, gay rights, religious minority rights – the early tone of the book seemed to suggest that he was advocating for a more deferential court, particularly from his review of abortion issues.

Interestingly, by the end of the book, he suggests that he would side with the view point of those such as Justice Rosalie Abella, who see the court’s role as interventionist - charged with the responsibility of protecting minority rights against the tyranny of the majority.

In some ways, the heart of the book is Slayton’s arrogant assessment of the Amselem case, a landmark religious rights case which he refers to as a “bad decision.” The case looked at the issue of whether a group of Orthodox Jews in Quebec could build sukkas (temporary huts) on their balconies for the eight day holiday of Succoth in a condominium building despite having agreed to property contracts that banned the building of any structures on balconies. The Supreme Court, by majority decision (5-4), narrowly determined that minority religious rights overrode other considerations, such as restrictive property covenants. In doing so, it carefully noted that there was no demonstrable threat to safety or security in the building and that minority religious rights could be accommodated in this type of situation where the real or perceived harm to the majority was minimal. Slayton sounds the alarm bells over the decision by exaggerating the deference provided to religious rituals. Although it is true that the Supreme Court held that only a sincerely held belief that a particular practice was required – in order to gain some level of protection for a minority religious practice – the Court also discussed the boundaries of the exercise of such rights – the discussion of which seems to have eluded Slayton. This decision from the Supreme Court gave real protection to religious minority rights – for practices that were unpopular – provided that they did not unduly interfere with the rights of the majority. This is a classic example of the Court protecting the rights of the minority against the majority – a principle that Slayton supposedly endorses by the end of the book – yet he dismisses this case with such disdain.

In the same chapter, Slayton argues that the Wilson Colony decision – which held that Hutterites (an Alberta religious community) cannot refuse to have their pictures taken if they want to get drivers licenses – is also wrongly decided because it is too harsh. Here the Supreme Court felt that the impact of hundreds of Hutterites having drivers licenses without photo identification – would outweigh their religious freedom. Slayton argues that the case runs contrary to Amselem but I think it is simply an application of it. In both cases, the Court set the boundaries of minority religious rights – depending on the extent to which they affected other rights and other aspects of social policy.

Slayton’s book spends a number of chapters on petty reviews of the personalities, backgrounds and, sometimes, hobbies, of the current members of the Court, whom he patronizingly divides into “the Chief,” the “Leaders of the Court,” the “Middle of the Pack,” and “Bringing Up the Rear.” I can’t imagine that Justices Deschamps, Fish and Cromwell could be too thrilled with being slotted into this final category – though the assessments of the judges – as with the other six – are all reasonably favourable. It seems to me that much ink is spilled unnecessarily on these sections of the book - especially since Canada is about to receive a number of new Supreme Court judges. Individual personalities are interesting and important – but in the long run – some are relatively ephemeral and have minimal impact.

At the end of the book, some of Slayton’s calls for reform are logical and persuasive – though I felt that the impact was undermined by a poor discussion of some of the Court’s decisions and by a fairly tedious discussion of some of the members of the current Court. Nevertheless, Slayton proposes changes to the appointment of judges with either a U.S. or U.K. model and term limits of twelve to fifteen years. The idea here would be to increase transparency and ensure that new ideas are considered – at least every 15 years or so. These changes seem to make good sense.

I’m less convinced that we should do away with regional representation or a preference for Court of Appeal judges (even if such judges have only spent a short period of time sitting on the appellate court) – both of which are also among Slayton’s preferred reforms. I’m torn over Slayton’s idea of insisting that all judges be fully bilingual. Although it makes sense to prefer this – the reality is that this would exclude a very high percentage of the Canadian population. We should probably start here with improving language instruction across the country – to first ensure that more Canadians are fluently bilingual.

Overall, I felt better about the book after reading the final chapter or so – though my impression was that it could have been reduced from 261 pages to a polemic article of about 20 – and it wouldn’t have lost of its forcefulness – and may well have avoided much repetition.
Posted by Ranana Reveller at 3:30 AM