Michael Coren's Why Catholics Are Right

Michael Coren’s latest book, Why Catholics Are Right is as pugnacious as the title suggests. Though relatively short, Coren sets out to explain or justify a wide range of official Catholic Church positions and historical conduct. Describing a variety of sources of anti-Catholic beliefs, Coren positions his book as a handbook for those who wish to defend Catholicism against its many would-be attackers. Coren paints the Catholic Church as an institution under attack. One might be confused into thinking he was describing a much smaller and more endangered religious group rather than the Church with its hundreds of millions of adherents. 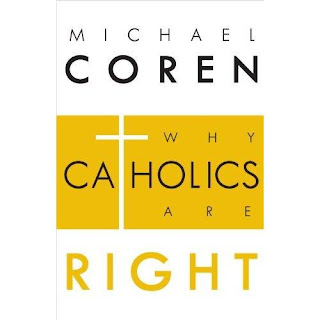 Calling anti-Catholicism the “last acceptable prejudice in what passes for polite society,” Coren is on a mission to respond to those perceived slights. He points out, on a few occasions in the book, that anyone who disagrees with the views set out in his book is simply wrong. In his introduction, he generously concedes that Non-Catholic Christians, including “serious Evangelicals and Eastern Orthodox believers” are only “slightly wrong.” Others, including Christians with different interpretations of the Bible, atheists, “part-time Catholic bashers” and presumably members of every other religious group are “wrong most of the time and to a shocking degree.”

With introductory words like that, it might be tempting for someone like me to simply close the book. But I am interested in reading a range of views, so I continue on. After all, the book is a mere 200 pages and is relatively easy reading.

Coren begins the book by addressing head on what he believes to be two of the major sources of attack on the Church, the abuse scandals and the crusades.

His first chapter downplays the sexual abuse scandals of the Church by essentially arguing that the rate of this type of egregious behaviour is no worse in the Church than anywhere else. He cites various statistics dealing with rates of abuse, both within the Church and other institutions all with the aim of disavowing any relationship between Church dogmas (requiring celibacy and only male priests) and abuse and by extension minimizing the level of Church culpability. He highlights a lengthy letter written by the current Pope in March 2010 to the Irish Church as reflecting Benedict’s historical role as “one of the fiercest opponent of abusers.” Though Coren attacks Christopher Hitchens’ writings on the subject as “cruel, flippant or dumb,” I found Hitchens’ review of the Church’s role in these abuse scandals in God is Not Great to be much more persuasive.

Coren ends the chapter by briefly addressing theological equality, explaining that the Church “simply does not have the authority to ordain women.” The Pope has spoken on this issue and those who disagree can “go elsewhere.” Even though Coren later in the book discusses the role of Biblical interpretation, he dismisses the notion of equality between men and women by arguing that “gender-bending may work in some areas of life but not in the institution that will take you back to God.” By way of contrast, Coren argues later in the book that the Church’s fight against abortion is like the fight of the early opponents of slavery. Sooner or later, the rest of the world will look back on the Church’s position as the correct moral position. But with respect to women’s rights to religious equality, Coren is completely dismissive. It seems to me that the arguments in favour of women as priests are much more analogous to those who fought and opposed slavery and other forms of discrimination. But of course, as Coren points out repeatedly in the book, anyone who holds this view must be wrong. He finishes the chapter with a spirited defence of the celibacy requirement for priests before moving along.

Entitled “Catholics and History,” the second chapter offers a defence of the Church’s behaviour through various historical periods. Coren provides his thumbnail sketch of the Church’s role in the crusades, defending the Church’s conduct at all times. Whether the Church acted in justifiable response to Muslim aggression or within the acceptable ranges of conduct at the time (however barbarian), the Church was part of a generally brutal medieval world, argues Coren. He continues on to suggest that it is ridiculous to pin the Spanish Inquisition (including the mass torture, forcible conversion and expulsion of Jews and others) on the Church and even downplays the number of people “hurt or affected by it.”

Coren also addresses the Holocaust and provides his historical version of why Pope Pius XII was a righteous man whose actions during the Holocaust have been misunderstood or overlooked. There are extensive historical works covering this complex subject which are outside of the scope of a book review. However, it is worth noting that in dealing with this topic, as with every other area that Coren covers in his book, there is no room for any other viewpoint and no admission of any possible errors or wrongdoing on the part of the Church. Coren does not address the history of anti-Semitism in the Church nor the manner in which this was addressed and changed by John Paul II. That would not fit with his thesis that the Church has always been right and everything is immutable.

Moving to theology, Coren explains the doctrines of the supremacy of the Church and of papal infallibility. Coren covers the compilation of the Bible by the Church between 393 A.C.E. and 419 A.C.E. Since the Church selected and compiled this version of the Bible, the Church must be infallible, since the Bible is infallible. This seems self-evidently circular to me. But there it is in black and white. And since Coren says it, it must be correct.

Coren goes on to explain the doctrine of transubstantiation, the importance of confession, Catholic beliefs about purgatory, saints, the Virgin Mary and other sacraments. He circles back to the history and origins of Christianity near the end of his book and ties the historical points there to the various doctrines that are discussed here. Libraries of material have obviously been written about these issues and there all kinds of viewpoints. For an explanation and understanding of the history of the development of the Church and review of the origins of its beliefs and dogmas, I would simply suggest that a book like How Jesus Became Christian by Barrie Wilson provides a much more detailed and critical look at these matters.

Next Coren moves on to social issues. He provides a vigorous and unquestioning restatement of the Church’s fundamentalist positions on a range of issues – abortion, birth control, euthanasia and homosexuality and provides short arguments in favour of each of the Church’s stated orthodox positions. Coren quotes former New York Mayor Ed Koch earlier in the book as saying “many in the public…are incensed by positions the Church holds, including opposition to all abortions, opposition to gay sex and same-sex marriage, retention of celibacy rules for priests, exclusion of women from the clergy, opposition to birth control measures involving condoms and prescription drugs and opposition to civil divorce….I disagree with the Church on all of these positions. Nevertheless it has a right to hold these views in accordance with its religious beliefs.” Since Coren is right about everything, as he points out in his book on a number of occasions, everyone who holds contrary views on any of the above issues is simply wrong, including, presumably the former New York Mayor and any other Catholics who might have more liberal views.

The final chapter turns to miscellaneous issues including the most crucial historical details of the life of Jesus and the origins of some of the key beliefs of Catholicism. Coren also discusses marriage annulment, the issue of communion for non-Catholics and the historical myth of a female pope (Pope Joan). On every issue here, as throughout the book, he provides his argument in favour of the most conservative Church view, allowing no room for historical changes, nuanced Biblical interpretations or even dissenting views within the Church.

Coren saves his harshest words for those who he describes as hypocrites – people who claim to be Catholic but act as if they are not. To Coren, there is no room for any liberal interpretation of Catholicism, whether in action or belief. To him, there is one truth, described by the Church, that all Catholics must follow if they are to be taken seriously and accepted as real Catholics.

Though interesting to read, Coren’s book was not particularly stimulating or thought provoking and certainly not persuasive. It sets out a range of beliefs that Coren and many other Catholics have chosen to follow but this is not a book that uses reason, scientific method or critical scholarship. I felt much more challenged by Richard Dawkins The God Delusion or Christopher Hitchens God is Not Great even though each of those books also had its own significant shortcomings.
Posted by Ranana Reveller at 12:34 PM